The following is an interpolation from our work-in-progress that allows for a segue between the second and first Arbuckle trials.

The day after second Arbuckle trial ended in a hung jury, the San Francisco’s newspaper announced the possible engagements of the two women who were present when Virginia Rappe passed away in September.[*]

Sidi Spreckels, the widow of the late John Spreckels Jr., had been linked to Art Hickman, the musician, composer, and leader of what is now considered the first real big band: the orchestra at the Ambassador Hotel in Los Angeles. But until recently, he had been the house bandleader at the St. Francis.

“Well,” said Hickman when approached by reporters, “we are great friends and have been for a long time. Many people have asked me about this rumored engagement. I cannot say a thing.”

Three days later, her attorney, Gavin McNab’s brother John, issued a terse denial that read in part that Mrs. Spreckels “isn’t contemplating matrimony at this time” and that “her rumored engagement is only gossip.” Maude Delmont’s rumored engagement was of a longer duration and contingent on her willingness to walk on stage.

On February 1, Bambina Maude Delmont became front-page news in Omaha and Lincoln, Nebraska. Newspapers in those cities profiled her and with whatever scant information she gave them, tried to make up for what little was known of her—that she grew up in Lincoln and spent two years running a beauty shop in Omaha. But when the local reporters and editors tried to search their files for anything about her, they came up empty handed. This allowed Delmont to fill a void of two decades after she arrived in Lincoln on January 31 and registered at a downtown hotel under the name “Mrs. J. C. Hopper.”

But the presence of the “Avenger” was no secret. Reporters were waiting for her when she got off her train as it arrived from Los Angeles at 1:20 on Tuesday afternoon. The young woman who had left twenty years ago on a career that was no less an adventure in fiction—the kind Willa Cather could not have experienced or written—had come home a celebrity. But just what kind eluded the press. They called her an actress, but she had only performed at Keystone Studio but had nothing to share about working with “Fatty” or the “Little Tramp.” She only mentioned that she had appeared with Minta Durfee, whom, despite everything, was “right charming” years ago—and she wasn’t “permanently reconciled” with her husband. But Delmont did want to talk about him and the role “money and influence” had played in his troubles.

“I’d might glad if Fatty could convince me personally that he is innocent,” she said. “But I was the first one to enter the room where Miss Rappe lay ill, and Fatty, I’m afraid, never could clear himself in my eyes.” As to what happened on Labor Day 1921, Arbuckle’s predicament had temporarily drawn her to his side.

When the asked if she believed Arbuckle would be acquitted, Delmont said she was certain that he would. What made her so certain? With an ironic smile, Delmont shrugged her shoulders and simply answered, “Money.”

Her impromptu press conference continued. Delmont described meeting met Rappe (“I fell in love with the girl at first sight.”) just two days before the party in Arbuckle’s suite at the St. Francis Hotel. She mentioned the 500-mile drive from Los Angeles with Semnacher and other incidents at the party.

Delmont enjoyed the attention she got—of being the person her high school teachers called “Maudie”—just as Rappe had been allowed to call her. On her first day in Lincoln, she was recognized by one admirer after another, including Robert Druesedow, a state representative, who saw her in the hotel dining room.

“I knew her when she was a girl,” he said of Delmont, whose hair was now described as totally gray. Other diners also recognized her as well as she spoke to a reporter from the Omaha Daily Bee. “Arbuckle could never convince me of his innocence,” she said. “I was the one who told the truth at the trial. Highly paid lawyers tried to sacrifice my reputation in an effort to protect their client, Arbuckle. I am trying to forget the tragic death of my friend, Virginia.”

Delmont also intimated that she would soon stop in Omaha and continue on to New York City. She also openly discussed being a convicted “bigamist.”

That, she said, was a technical charge that cost her a total of two weeks in jail. But how she left California without violating her probation was something that she didn’t have to explain. She was in Lincoln on legal business. She had come as a representative of her mother, sister, and herself “to dispose of some modest real estate holdings” that belonged to her grandmother, a Mrs. Catherine Stone. That Delmont had no such blood relative wasn’t explained either—but there was a deceased person with that name, the widow of a small-town clothier, who had passed away on January 28 in nearby Central City, Nebraska. Her obituary had appeared in the newspapers of that city, Grand Island, and elsewhere—making it easy to borrow the late Mrs. Stone to make a better story for Delmont’s real purpose in Lincoln: her deliberate rendezvous with an old boyfriend, Lawrence T. Johnston.

The son of a prominent Nebraska lawyer, Johnston had served as a bailiff in Lincoln n the 1890s and early 1900s and later as a judge in Idaho. His real ambition, however, was in vaudeville. He studied ventriloquism and by 1920 had performed all over the United States and as far away as Australia. When he and Delmont were reunited, he was still an itinerant judge in Idaho as well as the “King of Ventriloquists,” who boasted a dummy that cried “real” tears.

Delmont and Johnston had been engaged several times before in their youth. “The last time,” however, he said, “she married a Cincinnati millionaire.” But after hearing about the death of Delmont’s grandmother and her coming to Lincoln, Johnston claimed that he left an engagement in Sioux City, Iowa to be reunited with his old flame—and to make her a star. He told the press that he was now vice president of a motion picture corporation and that his company intended soon to star Delmont. “We feel that she will be a great asset to us,” Johnston said. In the interim, however, he convinced Delmont to cash in on her notoriety.

The couple left Lincoln on Friday, February 3—the day the second Arbuckle trial ended in a hung jury—for Kansas City, Missouri. There Johnston was to appear at the Globe Theater and Delmont intended to rest due to ill health.

“Why, nobody ever thought it would be that strong,” she continued. “Everyone on the coast expected an acquittal when I left there. Arbuckle is being tried on the murder complaint to which I swore—and yet my testimony is not good enough to be introduced into the trial. They wanted to get me out of the way and they succeeded.”

Delmont also spoke of the “intrigue” that was woven throughout the affair, apparently in reference to Zey Prevost and Alice Blake, who had eclipsed her as a witness.

“Yes,” she said, “I received an offer or was ‘approached’ in connection with my testimony of the death of Miss Rappe.”

Delmont refused to answer any more questions about who had tried to get her to change or withhold her statement to San Francisco’s district attorney. But she had a reason to withhold such details, for she had been approached in another way, perhaps en route by a theater promoter, to give a lecture during the couple’s layover in Kansas City. Regarding this new opportunity, Delmont could only say that she wanted to discuss “the woman’s side of the affair”—and that many young girls who went to Hollywood so as to “get into the movies” were exploited.

Delmont’s lecture was announced in the Saturday morning Kansas City Times of February 4. The venue was Kansas City’s Empress Theater on McGee Street. Although no times were given, the tickets for her “$5,000 act” would be “at pre-war prices,” that is, ten, twenty—and thirty cents for balcony and front-row seats. The advertisement promised that Maud “Bambina” Delmont would appear as “Herself / The Woman Who Signed the Murder Charge Against Arbuckle / The Most Sensational Act on the American Stage.”

Presumably in character as the “Complaining Witness in the Arbuckle Trial,” Delmont was to “tell of the famous Arbuckle-Rappe murder case” and “rip wide the screen which hides Hollywood and the movie colony. Hers is a story for Every Father and Mother, every Young Man and Young Woman in Kansas City.”

But if she ever took the stage was left in doubt. The San Francisco Call reprinted the lone Kansas City advertisement ten days later and could only speculate that Delmont’s run at the Empress had been abortive, based on a letter that she had written to a friend in San Francisco.

Mrs. Delmont’s gray negligee with henna trimming and black hair streaked with gray, minus the usual henna trimming, is making the same hit in Kansas City that it did here when first she received representatives of the press and gave her version of the fatal party. But evidently the stage is not making much of a hit with her—or else she is not making much of a hit on the stage—for she expects to sign a contract in Chicago to appear before the women’s clubs of that country.

What is known is that Delmont had a falling out with Lawrence Johnston and the couple parted ways. Delmont traveled on to Chicago and Johnston returned to the vaudeville circuit, realizing, perhaps, that it was easier to make money with his dummy doing the talking than Maude Delmont, who turned out to be a source of disappointment for him once more. Months later, Johnston emphatically told a stage gossip columnist in Portland, Oregon, that when he reached Lincoln, he had “something to say in the matter” and that he and Maude “never were, are not and never will be married.” 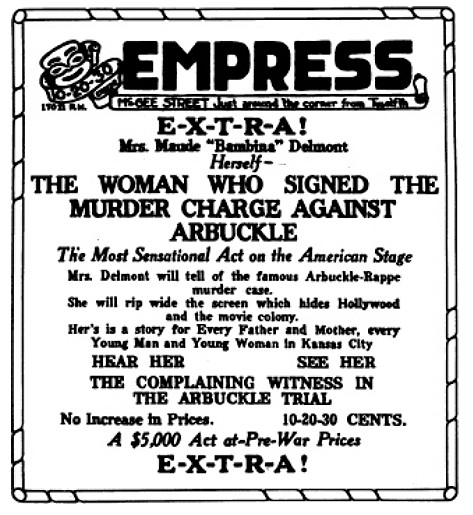